From the world’s great waterways to its dramatic coastlines, Viking combines their beloved river cruises and ocean cruises to help you broaden your horizons even further. Designed for those who want to get the most from their rivers and oceans itineraries, these enriching journeys highlight the historic treasures, colourful cultures and seldom-seen sights of both inland and coastal destinations, so you will enjoy the full Viking experience on one seamless itinerary. Viking River & Ocean Voyages bring you the best of both worlds. 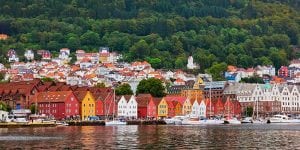 Explore cultural, scenic and historic treasures from Bergen to Basel. Sail among the pristine fjords of Norway, calling on vibrant cultural capitals. Follow the legendary Rhine into the heart of Europe, where riverside castles have witnessed a dramatic past.

Bergen, with its historic Bryggen wharf, exudes the quaint character of a fishing village.

Nestled in the breathtaking Aurlandsfjord, Flåm enjoys a spectacular setting.

Kristiansand is a vibrant city with an inviting Old Town and a historic fortress.

The northernmost point of Denmark, Skagen is a charming old fishing village.

The North Sea has been central to Europe’s history, from Viking voyages to oil drilling.

Amsterdam, city of charming canals and elegant, gabled houses is a delight to explore. Today, you will disembark Viking Sun and transfer to your river ship to continue your Viking Voyage by river.

The South Holland village community of Kinderdijk includes a set of 19 windmills and other ingenious technologies built in the 18th century to control flooding.

An intriguing mix of old and new, Cologne reveals its Roman heritage in the city layout and ancient ruins that lie scattered through the town.

On a breathtaking stretch of the Rhine that leads from medieval Koblenz to Braubach to Rüdesheim, the 11th-century Marksburg Castle towers over the river.

Germany’s oldest university town, Heidelberg and its castle are situated in the Neckar Valley just east of the Rhine.

Thanks to its location at the border of France and Germany, Strasbourg boasts a convivial mix of cultural influences.

Breisach is located in one of the warmest parts of Germany, next to Alsace, which is famous for its wine growing.

Located along the Rhine River, Basel sits at the point where French, German and Swiss borders meet, marking the gateway to the Swiss Rhineland.