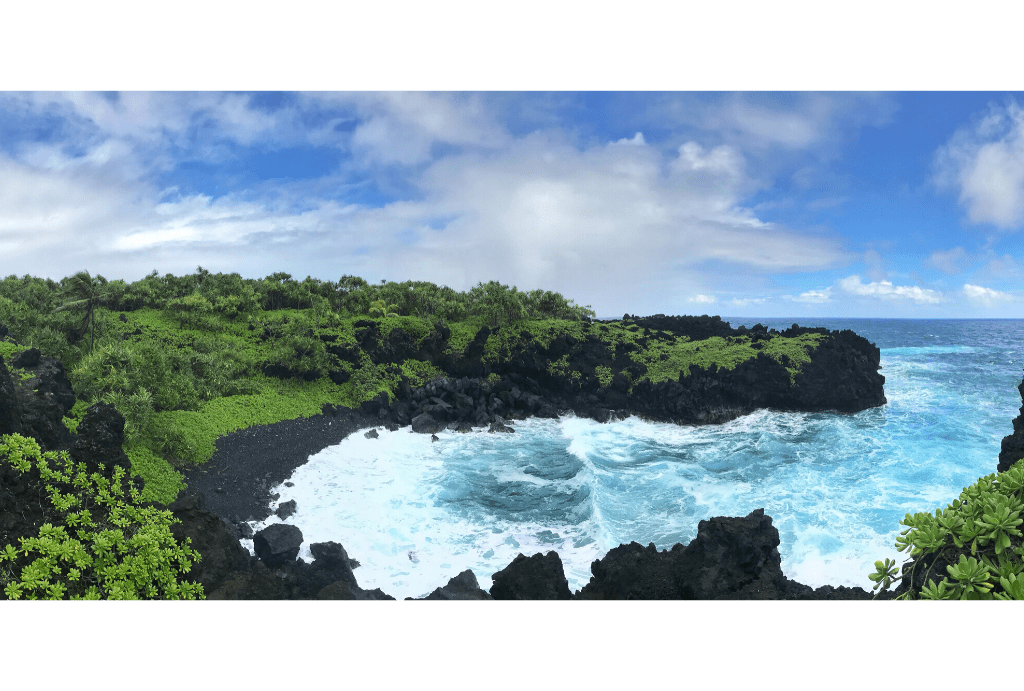 I’d always dreamed of visiting Hawaii; a volcanic group of islands, each with their own paradise to explore. With two and a half weeks for island hopping, we first flew into Honolulu and then took the short flight across to the eastern island of Kauai, also known as the Garden Island. After picking up our hire car for the next five days the excitement reality set in! The wide roads weaved through dense greenery as we made our way to our accommodation just outside the southern town of Poipu, and with most of the islands compact enough to drive in a day it was a blessing knowing we’d be staying in one place until it was time to hop to the next island. A helicopter tour of Kauai really gave me an appreciation for the landscape, taking in the vibrant rainforests, waterfalls cascading down cliffs and the justifiably famous Na Pali coastline; it’s not hard to see why Jurassic Park and Indiana Jones were filmed here. The following day was for exploring by car, heading up to Waimea Canyon (aka the Grand Canyon of the Pacific) with its red sand rivalling Australia, and then to the town of Hanalei. This picturesque town is one stretch of road lined with independent stores, fresh food vendors, and plenty of options for shaved ice.

From Kauai it was a quick flight to Maui, where our home was a bungalow set in the jungle above the old ranch town of Makawao. This area is known for its cowboy history – Makawao looks like something plucked out of an old western film – and was a perfect place to base ourselves at the beginning of the Hana Highway. This scenic drive follows the coast down to the town of Hana, with countless areas to pull off the road and admire waterfalls, arboretums, the ocean and of course, try their famous banana bread! We stopped at Black Sand Beach, which made for some pretty incredible photos, and came to the end of our journey at Kaihalulu Beach, a secluded cove of red sand that we had all to ourselves! From feeling like we were at the end of the world to feeling otherworldly, a few days later we were up before dawn to watch the sunrise at the summit of Mt Haleakalā, revealing a truly lunar landscape as the clouds disintegrated in the morning light. Although we’d been driving up the dormant volcano in a minivan, our way down was on two wheels, spending the next few hours winding our way downhill on bikes through ranch properties and pineapple plantations.

Next up was the Big Island, via a small plane! Our exciting flight on the eight-seater provided great views for the entire flight, including the stark contrast between the greenery and volcanic rock that dominates this island. We stayed in the hills above the town of Kailua-Kona, where we became regulars at Basik Café, a small wooden building dishing up the best Acai bowls I’ve come across. We spent a day at a beach surrounded by solidified lava rock, in the company of a sunbathing monk seal and a couple of turtles floating amongst the waves. This island is also home to Mauna Kea, the state’s tallest peak that hosts 13 different observatories. The summit was closed the afternoon we visited, but the Visitor Centre still offered an amazing view for the sunset before bringing out telescopes for some truly spectacular stargazing.

Our last two nights were spent on Oahu, in the comparative hustle and bustle of Waikiki. Not ready to leave the open road behind we drove up to the North Shore, famous for its surf break – Pipeline – and the Pipe Masters surf competition. The people up here live and breathe surfing, the town of Haleiwa is so chilled (and not just because of the multiple shaved ice stores). The last night of our Hawaiian adventure coincided with the Pearl Harbour Memorial Parade, a patriotic procession that honours the Pearl Harbor survivors, veterans, active duty military and their families with floats, classic cars and marching bands. Whilst this was an unexpected addition (and not unlike something I’d seen in movies), the main street was alive with people and excitement and it served as a reminder that even the biggest city in Hawaii can still feel like a tight knit community.

Ready to plan your own Hawaiian adventure? Call Rachel for more of her insider knowledge and access to these exciting experiences 03 9481 1077